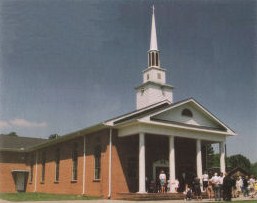 Tunnel Hill United Methodist Church was organized around 1848.  The original deed was issued in 1848 with Rev. Clisby Austin listed as its Trustee.  The first church, which stood behind Mr. Edward Farr’s home, was erected not long after the deed was issued and at one point during the Civil War it was used by federal troops as a stable.

Construction on the second church building began in 1893 and was completed in 1894.  The Trustees for this property were Mr. Foster, Dr. Harland, and Mr. Heggie.  The first pastor to serve in the new church facility was Rev. Clayton Quillian.

The Wesleyan Service Guild was organized in 1941 with Mrs. George (Elizabeth) Long elected as its first president.  This group has been listed under several different titles across the years.  Today it is known as the United Methodist Women.  A Men’s Group was also started in 1950 and continues to meet at Tunnel Hill UMC today.

To fulfill a dream for a third church facility, a financial campaign was launched in January of 1964 and construction of a new church building began later that same year.  Members of the Building Committee included Tom Smith, E.M. Farr, Ernest Griffin, Mrs. Tyson Griffin, Jr., Harry Griffin, and Albert Griffin.  This third church facility was completed on March 27th, 1965 and the first service which was led by Rev. J. Austin Gladney on the following day.

In July of 1968, a new parsonage was built near the church.  The Rev. James Mitchell family was the first family to reside there.  A Fellowship Hall was later constructed adjacent to the church.  It was dedicated to the memory of Andy Anderson, son of Ray and Pat Anderson.

From 1890 to the present, Tunnel Hill United Methodist Church has had 57 pastors.  Several other pastors served the church prior to 1890, however a complete list of their names has never been discovered.

The members of Tunnel Hill UMC are certainly thankful for what God has done through this church in the past, but they’re also excited about what lies ahead!